How We Over Personalized Automated Newsletters in Kentico

Personalization might be your friend, but it also could become your enemy. Wrongly set up, personalization can harm your evaluator’s experience more than not doing it at all. And that’s exactly what happened to us in Kentico.

When I started to learn more about online marketing, I didn’t have many positive things to say about email marketing. As a regular Internet consumer, I used emails just for personal communication and not even very often. With my first job, I learned how important a tool email is when you want to reach someone you don’t really know. Or even you do know, but at that time, you feel that picking up the phone and dialing their number is not the best way to contact them.

I have another thing to confess; I also didn’t like automated advertising emails. I was bored by crazily colorful email templates, poorly written copy, and emails being sent from no-reply as it’s something that directly says, “I’m spam”. I remember when my colleague asked me for help with writing a series of newsletter offering various electronics that were on sale. The client was one of the biggest electronics retailers here in the Czech Republic. I wasn’t any email marketing expert, but I had a pretty good picture about the way I would like to do it. After consultation with the client, we had completely redesigned their email marketing, and we later received positive feedback from various people inside and outside the company.

The Emails You’re Receiving from Kentico

Here at Kentico, we’re sending hundreds and hundreds of emails every day. Some of them are being sent as a part of a lead nurturing process, some of them are triggered by a particular activity on our website. Others should inform our lead and customer base about what’s new in Kentico, and we have emails that are being sent to our partners to keep them up to date about the partner program. You can distinguish between the emails by the email template—we’re using a different one for lead nurturing, and a different one in newsletters for partners. The email signatures and senders vary as well—sometimes we’re using real people’s names, sometimes we’re fine with just the Kentico team.

So, when we were discussing the redesign of the marketing automation that is triggered by someone downloading the trial version of Kentico, we wanted to make these automated emails indistinguishable from those that were sent from a real person, right from their mailbox.

We created a new email template that contains only a white background and a simple sans serif font. In order to do the email marketing legally, we had to keep a link there that people can use to unsubscribe themselves from the emails. You can check below how we dealt with it:

When someone downloads a trial version of Kentico, we consider this person to be in the late product evaluation phase. Since it’s also a phase when leads might get in touch with our sales representatives, we used their names in the email signatures and as the senders of the emails. Regarding the sender’s email address, one of the suggestions was to use sales people’s own email addresses so if anyone would reply to the email, it would appear directly in their inbox. But considering the number of emails that are sent every day and the assumed ratio of canned responses, this wasn’t a really feasible solution. We then settled for using the sales@kentico.com email address, where the responses are collected in our CRM in the form of a ticket and assigned to a particular sales representative to handle the communication.

The Feedback We Weren’t Expecting to Get

The redesigned project was a success. Due to changes we had made in the setup, structure, emails, and the content itself, the open rate and click rate data increased. After the launch and some trial period, we focused on delivering other projects and campaigns. And then we got the first reactions from our partners, and those reactions weren‘t positive at all. All of them had one thing in common – emails recipients were confused by the emails they were receiving. What was happening was that when our partners downloaded the trial version again, it obviously triggered the marketing automation, where our sales representatives were introducing themselves in the first email, sending a link to documentation, offering a live demo presentation of Kentico...

I don’t have to describe to you further how messy the situation was. With making the emails look like they were sent manually from someone’s mailbox, we tricked people into believing it had happened so! But before any celebrating (because we actually achieved what we intended to), we had to clean up the mess. To ensure that our partners wouldn’t be receiving these automated emails anymore, we put a condition on the process’s trigger—exclude people that are in a contact group called Active partners. Into this contact group, we manually uploaded the list of our active partners we had exported from our CRM. To keep the contact group updated with new partners, we’re manually updating it on a regular basis. 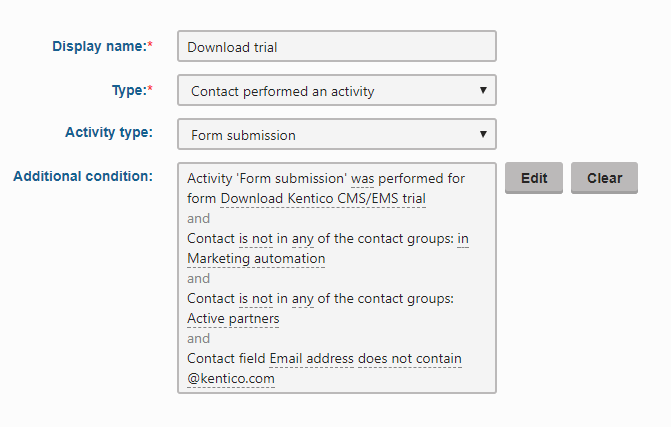 Now you’re thinking aha, that’s how they got increased open rates and click rates! That was our concern as well, that people had opened the emails because they thought our salespeople are reaching out to them with something important. After the trigger restriction, we watched the data closely and you’re partially right, the open rate slightly dropped. Comparing the data before and after the redesign, we’re still having at least 4% increase in every email from this marketing automation, and with that, we’re calling it successful. With a lesson learned!

Do you have a similar experience with well-intended personalization? Share it with us in the comments, we’d love to hear your stories!